In a prelaunch press conference on Tuesday, representatives from the agency, the Japan Aerospace Exploration Agency (JAXA) and the European Space Agency (ESA) confirmed that they were set for a 6:11 a.m. ET liftoff from NASA’s Kennedy Space Center in Florida. 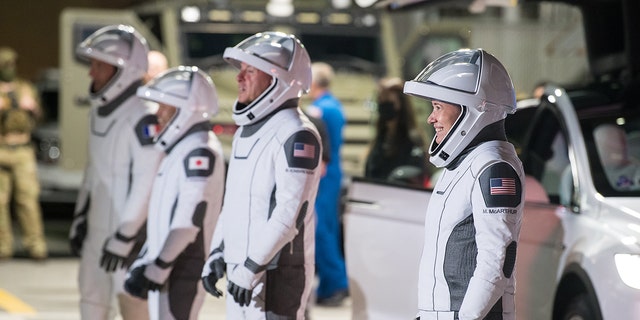 Once there, International Space Station manager Joel Montalbano said they will conduct more than 260 scientific experiments and that the fourth crew member will help to increase the research and development for both the highly anticipated Artemis program and the low Earth orbit commercialization efforts.

“With the crew-2 launch, we welcome the European Space Agency’s flying an astronaut for the first time on Dragon. We also welcome back the Japanese Aerospace Exploration Agency flying on Dragon for a second time,” he added. “So, truly an international program and this is our future where we’ll have international partners on our vehicles for the future. That’s a goal and that’s where we’re planning to be.”

Speaking before Montalbano, Commercial Crew Program manager Steve Stitch said that the NASA-SpaceX team had its first “Readiness Review” and dress rehearsal on Tuesday morning, leading to the conclusion that it was “on track” for Thursday and that — assuming there are no changes — docking would be scheduled for Friday at around 4:30 a.m. ET.

According to Cizek, downrange weather and winds remain the biggest concern.

Benji Reed, SpaceX’s senior director of human spaceflight programs, thanked NASA for awarding its $2.89 billion commercial human lander to SpaceX and said that the Elon Musk-owned company is excited to be able to fly crew again.

He said that the teams will continue to perform analyses and data assessments, called “paranoia reviews,” until it’s time to fly.

“And, in fact, our teams are actually doing even additional practices, like I mentioned, we continue to want to ensure that everything is great. And so we’re continuing down that path as we get ready for Thursday,” Reed said.

“It’s the vigilance from the teams that guarantee that continued safety and it was definitely present in these reviews this week. And you know you step back and you look, it’s, it’s, it’s hard enough in a regular environment but you put COVID on top of that; it’s been exceptionally impressive what these teams have been able to pull together,” he said.

“The cadence is very good for the teams, between SpaceX and NASA people are working well with each other. We’re looking forward to a successful mission. And again, it’s just a very exciting time,” he said.