CBS NEWS
April 20, 2021
The news, announced Tuesday, threw another complication into the European Union’s vaccination rollout and dealt a major blow to the company a week after its vaccine was paused in the United States.

The European Medicines Agency (EMA) concluded that “a warning about unusual blood clots with low blood platelets should be added to the product information” about the shot given to patients.

“All cases occurred in people under 60 years of age within three weeks after vaccination, the majority in women,” the EMA said. “Based on the currently available evidence, specific risk factors have not been confirmed.”

The agency added that “the combination of blood clots and low blood platelets is very rare, and the overall benefits of COVID-19 Vaccine Janssen in preventing COVID-19 outweigh the risks of side effects.”

The agency’s findings are nonetheless a setback for the pharmaceutical giant, and come as it awaits the results of similar investigations by regulators in the United States.

The vaccine was paused in the country on April 13 after the reports came to light, and Johnson & Johnson decided to “proactively delay” the rollout of the shot in Europe on the same day.

The US Centers for Disease Control and Prevention (CDC) is looking at a “handful” of reported adverse events after people received the vaccine, it said on Monday, and it is expected to announce its own conclusions on Friday.

Johnson & Johnson had further complicated matters after initial reports of blood clots came to light on April 9 by pointing a finger at Pfizer and Moderna’s vaccines, issuing a media statement that said a study showed there were reports of blood clots with their shots as well. The author of the study they cited said that is not what her research found. 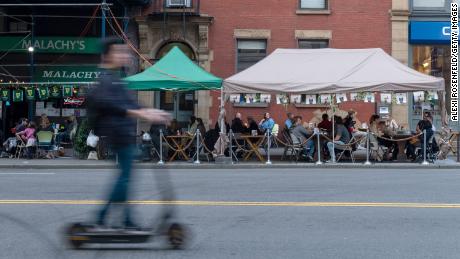 The company will now seek to claw back confidence both in the United States and Europe. Inoculation programs have ramped up in both regions in recent weeks; the US is vaccinating millions of people each day, while the EU’s rollout has improved after a bumpy start.

Johnson & Johnson’s shot had been authorized for use by the EMA on March 11, but was not yet in widespread use.

The vaccine has been touted as a potential game-changer in the pandemic because it is given in one shot; most of the other approved vaccines around the world are given in two doses, spaced at least a few weeks apart.

But it has become the second vaccine to be paused in Europe over fears that it can cause rare blood clots. Rollout of the Oxford-AstraZeneca shot was delayed for several days in many EU countries after a similarly very small number of clotting reports came to light, and experts fear that confidence in that vaccine has suffered as a result.

Multiple health regulators have stressed that the overall benefits of the AstraZeneca vaccine still outweigh the risks, but some European countries are restricting use of the shot to older age groups while UK authorities advised that people under 30 are given different vaccines.