Prince William and Kate Middleton honored Prince Philip with a post on Twitter following his royal funeral on Saturday.

The Duke of Edinburgh died on April 9 at 99 years old and his grandson previously reflected on the consort’s commitment to family and service in a statement released shortly after news of Philip’s death was confirmed.

However, the Duke and Duchess of Cambridge issued another tribute to Philip shortly after his celebration of life ceremony ended.

“The Duke of Edinburgh was a devoted consort to Her Majesty The Queen for nearly 70 years, from Her Majesty’s Accession in 1952 until his death,” the brief statement posted to their official Twitter page reads.

PRINCE PHILIP HAD ONE IMPORTANT PIECE OF ADVICE FOR THE YOUNGER ROYALS BEFORE HIS DEATH, FILMMAKER SAYS

The words honoring Philip came along with two photos of the funeral, one of them standing behind Philip’s coffin and the other showing William and his brother, Prince Harry, alongside other family members following the casket into St. George’s Chapel in Windsor Castle.

The royal couple weren’t the only people to honor Philip shortly after the funeral. The Royal Family’s Twitter account shared an image of Philip tipping his hat alongside the caption: “In loving memory of His Royal Highness Prince Philip, Duke of Edinburgh.”

All eyes were on William and his younger brother, Harry, at the funeral as it marked the first time they’d seen each other at a public event since an alleged rift was caused between them over Harry’s decision to step aside from his senior royal duties and move to California with his wife, Meghan Markle. The family rift appeared to heighten just last month, following Harry Meghan’s bombshell interview with Oprah Winfrey. 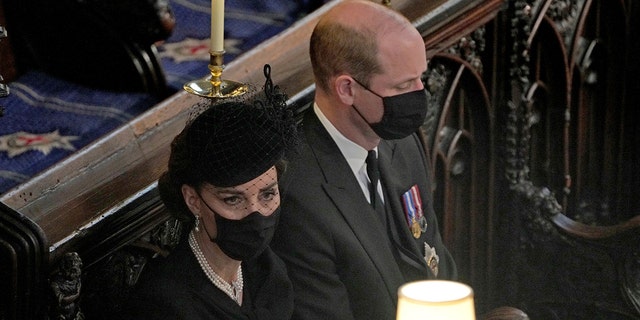 Britain’s Prince William and Kate Duchess of Cambridge sit together at St. George’s Chapel during the funeral for Prince Philip, at Windsor Castle, Windsor, England, Saturday April 17, 2021. Prince Philip died April 9 at the age of 99 after 73 years of marriage to Britain’s Queen Elizabeth II.
(Yui Mok/Pool via AP)

However, the duo sparked reconciliation rumors after they were spotted exiting St. George’s Chapel together, side-by-side.

Harry, 36, did not walk alongside his brother William, 38, during the procession. The two joined family members in walking behind their grandfather’s casket with their cousin Peter Philips walking in between them.