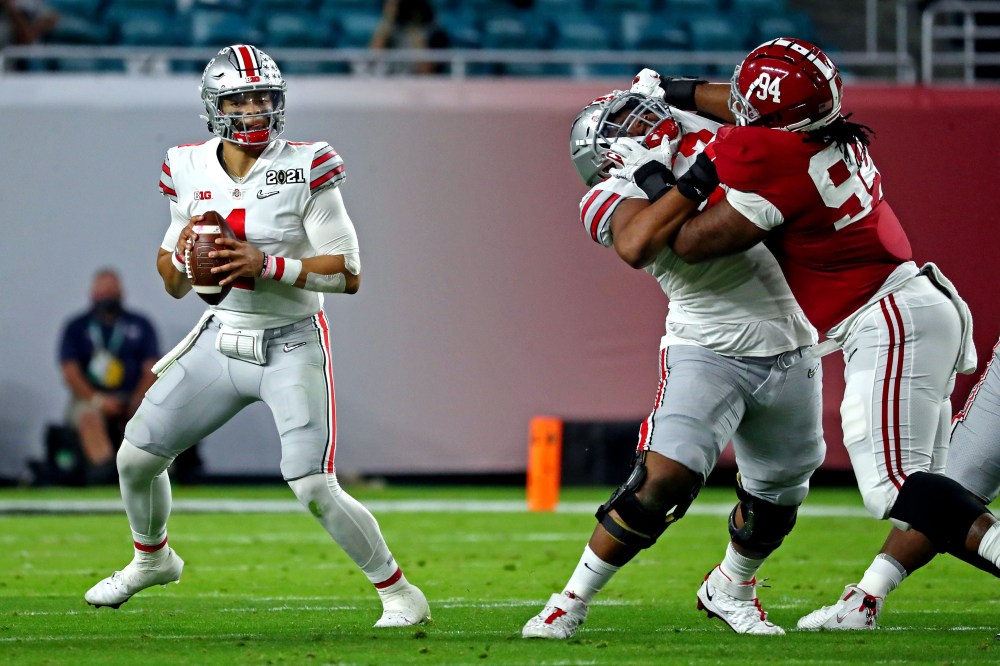 It sure seems like Fields is the quarterback who most closely checks the boxes Shanahan laid out. He’s big, fast, strong and can sit in the pocket and make throws. His athleticism is an additional asset, not the quality on which a majority of his success hinges on. Fields has a great arm and utilizes it from the pocket and on the move when plays break down. The ability to create off schedule when needed could pretty easily help outweigh any advantage another quarterback might have from the pocket.

That added layer of speed would be a nightmare for defenses to worry about against a 49ers run game that’s already difficult to defend. Putting one more number in the mix would allow Shanahan to draw up more actions that create mismatches for the 49ers’ offensive line.

One interesting wrinkle to watch will be how Lance winds up factoring into the discussion. He’s the most experienced in play-action passes with his back to the defense. ESPN’s Nick Wagoner tweeted a slew of numbers that indicate Lance’s readiness to run a play-action game like Shanahan’s is superior to the other signal callers expected to be available when the 49ers pick. Lance checks a lot of the same boxes Fields does, but his 17 starts at the FCS level make his pro readiness a significant question mark. Still, it wouldn’t be a huge surprise if he winds up becoming the third selection in this year’s draft.

While differentiating between Lance and Fields comes down to various nitpicks, what really stands out is where Jones lacks in the areas Shanahan laid out. He’s neither the biggest, nor fastest, nor strongest, and his play from the pocket isn’t so substantially better than the other two that it makes sense to put him ahead of the pack.

Jones appears to fit into the Cousins mold Shanahan mentioned when he said he’s a quarterback a team can win with. Jimmy Garoppolo is that as well. The 49ers are clearly looking for something more than that, and if they weren’t, they might’ve sat at No. 12 to see if Jones fell, or found a prospect they liked in Round 2 to try and plug in.

So, while Shanahan maybe didn’t give enough to let us know who it will be, it sure seems like he laid out some qualities that tell us who it won’t be.