Abdullah Abdullah, Chairman of the High Council for National Reconciliation (center) walks with Secretary of State Antony Blinken at the Sapidar Palace in Kabul on Thursday. 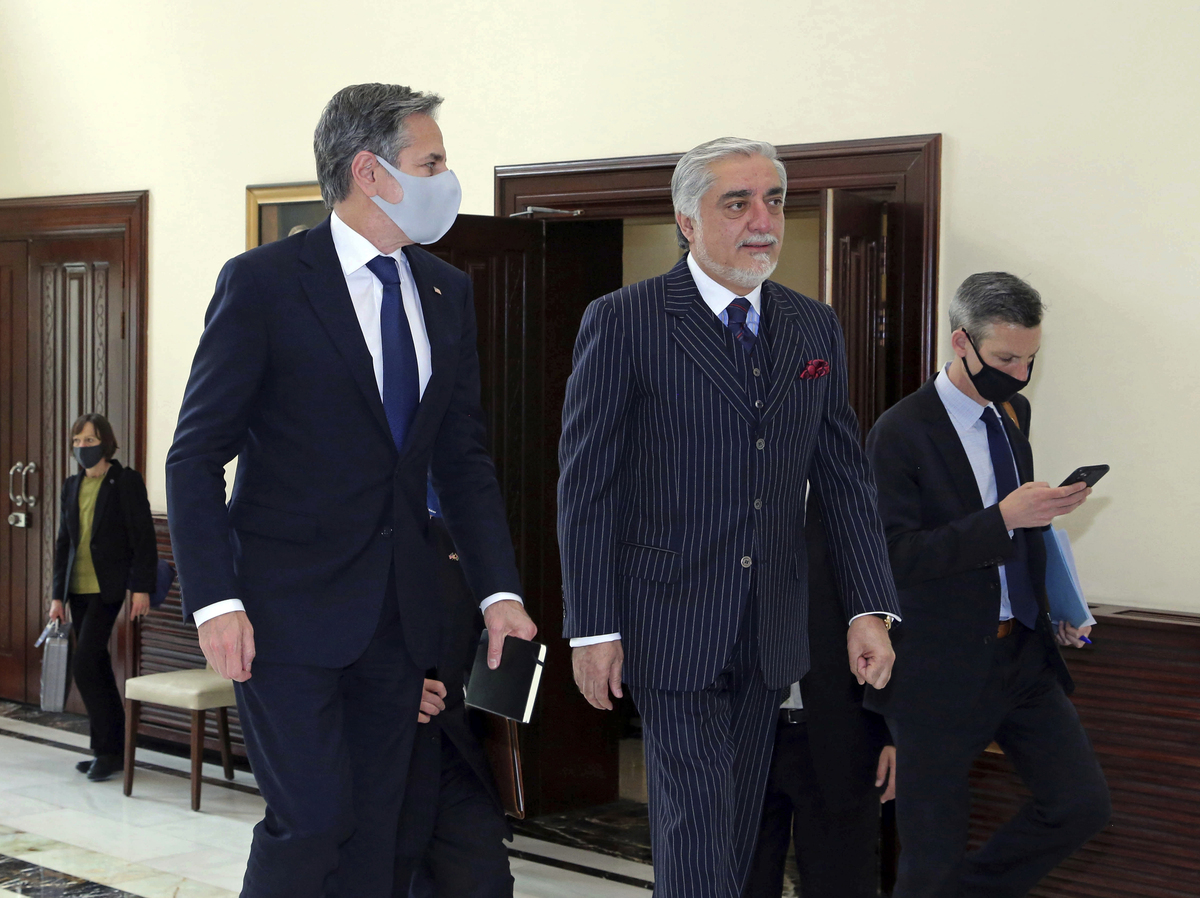 Abdullah Abdullah, Chairman of the High Council for National Reconciliation (center) walks with Secretary of State Antony Blinken at the Sapidar Palace in Kabul on Thursday.

Secretary of State Antony Blinken arrived in Kabul on Thursday in an unannounced visit that comes just a day after President Biden announced that he has decided to withdraw all U.S. troops from Afghanistan, ending America’s longest conflict.

Blinken told Afghan President Ashraf Ghani that his visit was intended to “demonstrate with my visit the ongoing commitment of the United States to the Islamic Republic and the people of Afghanistan.”

Ghani replied: “We respect the decision and are adjusting our priorities.”

On Wednesday, Biden announced that the remaining 2,500 U.S. troops would be coming home by Sept. 11, the 20th anniversary of the terrorist attacks that sparked a U.S. invasion of Afghanistan.

The withdrawal would fulfill a deal the Trump administration struck with the Taliban last year — although that agreement pledged a full pullout of U.S. troops by May 1.

Biden has said that a continued military presence in Afghanistan is no longer sustainable. The war there has claimed the lives of more than 2,300 U.S. troops, and more than 100,000 Afghans civilians have been either killed or wounded in the conflict in the past decade.

Blinken arrived in the Afghan capital as NATO announced that it would follow the U.S. lead and withdraw its roughly 7,000 troops from Afghanistan within a few months.

“After years of saying that we would leave militarily, at some point, that time has come,” Blinken said at a news conference at the U.S. Embassy in Kabul. “But even when our troops come home, our partnership with Afghanistan will continue our security partnership will endure.”

Even so, he issued a warning to the Taliban. “If as our forces are withdrawing the Taliban were to attack them, it would be met with a very forceful response,” he said.

He said the U.S. will continue to support Afghanistan in its fight against Islamist insurgents and “to support civil society, and to advocate for equal rights for women, including their meaningful participation in the ongoing negotiations, and their equal representation throughout society.”

“We’ll maintain the American tradition of providing humanitarian assistance for those most in need, including women, girls and refugees,” he said.

A State Department readout of Blinken’s meeting with Abdullah Abdullah, a former Afghan foreign minister who now serves as national reconciliation chairman, said the two “discussed the importance of continuing to work toward a negotiated political settlement and permanent and comprehensive ceasefire.”

Blinken committed to providing the country with a full “diplomatic, economic, and humanitarian toolkit to support the future the Afghan people want, including the gains made by Afghan women,” it said.

In recent months, Taliban militants have launched a wave of targeted killings against influential Afghans, including journalists, human rights activists, judicial workers, doctors and clerics. The killings began escalating last September, amid peace talks began between the Afghan government and the Taliban.