Deshaun Watson reportedly has teams in mind when it comes to where he would potentially like to be traded to and two AFC East organizations are on the top of that list.

The New York Jets and the Miami Dolphins rank Nos. 1 and 2 respectively on Watson’s trade-destination list, the Miami Herald reported Saturday. The Jets are on the top of the list because of the team’s recent hire of Robert Saleh as their next head coach, the Herald reported.

While the Houston Texans didn’t make the playoff this season, they have made it twice since Watson became the team’s starting quarterback. Watson entered the league prior to the start of the 2017 season. Neither the Jets nor the Dolphins have made the playoffs in that span. Both teams have only made the playoffs once since the 2010 season.

It’s unclear exactly what it would take for either team to trade for Watson. Predictably, both teams would have to mortgage their futures and potentially miss out on a top rookie quarterback or wide receiver come spring. Trevor Lawrence, Justin Fields, Zach Wilson, Devonta Smith, Jaylen Waddle and Ja’Marr Chase are all going to be in the same player pool. 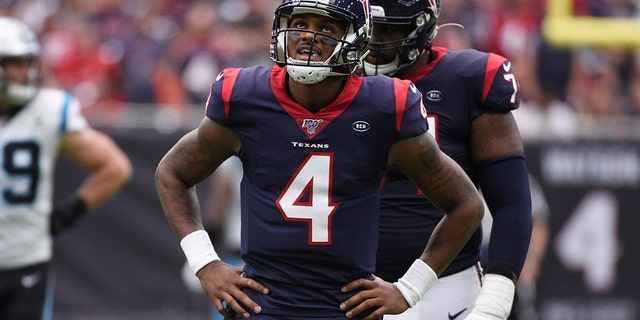 Houston Texans quarterback Deshaun Watson (4) reacts to a play during the first half of an NFL football game against the Carolina Panthers Sunday, Sept. 29, 2019, in Houston. (AP Photo/Eric Christian Smith)

Watson’s unhappiness with Houston has been documented closely since the end of the 2020 season.

Watson “just wants out” of the Texans, a source told Sports Illustrated in a story published last week. The longtime Texans quarterback, arguably the best quarterback the organization has ever had, reportedly found team owner Cal McNair’s comments on their relationship “patronizing.”

DESHAUN WATSON ‘JUST WANTS OUT’ AMID RUMORS OF UNHAPPINESS WITH TEXANS: REPORT

Another issue that came up was Watson’s input on the next coach of the Texans. Watson reportedly was hoping Houston would interview Kansas City Chiefs offensive coordinator Eric Bieniemy for the coaching job, but the team didn’t and now must wait until next week to do so. Patrick Mahomes told Watson that Bieniemy was the one who helped direct his career into what it is now, a source told Sports Illustrated.

Watson’s growing frustrations were documented last year, after DeAndre Hopkins was traded to the Arizona Cardinals. Watson offered his input on potential general manager candidates, but the Texans failed to consider their franchise quarterback during the process, ESPN reported. The Texans reportedly didn’t tell Watson that they had hired Nick Caserio as the team’s next GM.

The quarterback has quietly met with his teammates about requesting a trade, Pro Football Talk reported.

San Francisco 49ers cornerback Richard Sherman even said that Watson should try and force a trade to the Jets.

“If I was Deshaun, I’d get out of there as quickly as possible. I’d head to New York. … The Jets,” Sherman said on a recent episode of “The Cris Collinsworth Podcast.”

DESHAUN WATSON SHOULD GET TO JETS ‘AS QUICKLY AS POSSIBLE,’ NFL STAR SAYS

“It would be the most beautiful. Decent offensive line. They’d have to find some threats, they’d have to find some offensive weapons, but I think there would be a lot more people excited to be there. I think the free-agency market this year is gonna be oversaturated because of the salary cap, but that’s what I would do. I’d be out of there on the first thing smokin’.”

Despite Houston’s 4-12 record in 2020, the Clemson product proved to be one of the elite quarterbacks in all of football. Watson set a career-high with a 70.2 completion percentage, he threw for an NFL-best 4,823 yards with 33 touchdowns and only seven interceptions.

The Associated Press contributed to this report.